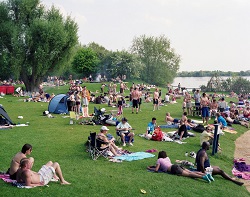 “Community” in the English-Speaking World

The concept and its uses in social and political discourse

The term “community” is widely used in the English language, in everyday conversation, in the vocabulary of social workers and political leaders, in the analyses of social scientists. The term is encountered in many different fields of research, though one is right to wonder if it refers to the same object.

“Community” is often used and invoked to the point of being naturalized as unquestioned common sense, and its usage and implications are seldom consciously examined or interrogated. It elicits positive, reassuring associations with what is familiar, close, recognizable. “Community”, as Raymond Williams underlines, is both "the warmly persuasive word to describe an existing set of relationships; or the warmly persuasive word to describe an alternative set of relationships” (“Community”, Keywords, A Vocabulary of Culture and Society. London: Fontana, 1983, p.75.)

Community is used by scholars, as a conceptual tool defining a social group interacting on the basis of shared interests, values, representations, language, cultural practices, with or without being bound to a specific geographic space; it is also used in an empirical manner as a descriptive tool which seems to conjure up an ideal level of social organisation characterized by closeness.

It seems to articulate the levels of local and global, especially with the rise of the internet which has strengthened the possibility for new “imagined communities” to flourish, beyond the national community whose symbolic representations were examined by Benedict Anderson.

What makes “community” such a successful and enduring concept? Is it always satisfactory and pertinent, or can it be an easy and fashionable word which may be reductive, generalizing, and even manipulative? The conference seeks precisely to interrogate the uses made of the term in political discourse, in the social sciences, in the terminology of organisations. The conference will explore the historical and contemporary uses of the term, from the utopian socialist communities imagined by Owen to uses of the term today, in relation with minorities or with online social networks. It aims at charting the course of a concept which seems to be equally present both in progressive and conservative political discourses.

Preference will be given to papers whose argument is centred on the uses of community in artistic, religious, social, political or academic discourse in the United Kingdom, the Commonwealth, and the United States or their transnational circulations to or from those spaces. Themes which papers could address include, but are not limited to, the following:

· Minorities and communities: use of the term in relation to ethnic, gender and sexual minorities, to refer to indigenous populations. Self-designating communities or imposed generalizing categories?

· Community vs “society”: what is at stake when one term is preferred to the other?

· Community Studies: community as an object of academic discourse