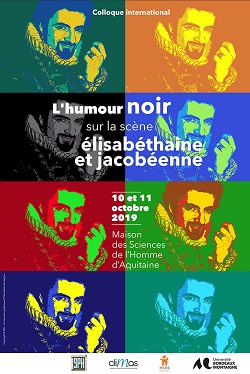 Notwithstanding the widespread opinion that ‘black humour’ (‘Humour noir’) was a phrase coined by André Breton, the co-founder of French Surrealism, in 1930s France; or that, as a mood, it epitomized a post-war American type of humour that persisted into the early 1970s as an expression of the disenchantment in the decline and fall of traditional values; research has shown how black humour was well instated in classical literature, not only in humorous epitaphs and epigrams that dealt with the theme of death (Stevanovic 2007), but in Greek philosophical literature (as in Plato’s Phaedon). Moreover, black humour is directly related to the humorism developed in ancient Greece by Hippocrates, Galen or Theophrastus, a theory introduced in classical comedy by Plautus and Menander and later borrowed and adapted by Elizabethan dramatists. Additionally, early modern research has shown how ‘[i]n plague time normal social decorum [was] breached as people put personal survival before established custom’ and that ‘this [was] productive of the characteristic black humour of observer accounts’, such as Dekker’s, who alludes to the ‘foolery, infidelity, humanity… villany, irreligion, and distrust in God’ which his stories ‘lay open’ (Healey, 1995). Parallel to the paradigm of death by disease, black humour, or gallows humour, summoned the tension that opposed hope and doom by joking about the convicted and their sense of despair as a strategy of coping with fear (Freud 1905) both witnessed and experienced.

Holly Williams, in an article published in The Independent in January 2015 writes about Dominic Dromgooles’s production of Middleton and Rowley’s The Changeling that it manages to ‘find black comedy in a grisly plot of murder, adultery and deceit’, astutely describing the play itself as a ‘tonal changeling’, oscillating between tragedy and the ‘pitch-black comedy’. The fundamental ambivalence alluded to in Williams’s review has long been identified as one of the defining features of a genre described in 1955 by S. Schoenbaum, writing on Middleton’s tragedies, as ‘a novel kind of drama – a drama that occupies a middle ground between comedy and tragedy’. These plays, with their disturbing blend of clashing genres often share that formal and moral ambivalence which transforms the most sinister of situations, the most scathing dialogues into eerily comic scenes. In Laughing and Weeping in Early Modern Theatres (2007), Matthew Steggle offers several definitions of laughter which help us realize that it is perhaps only one side of a bipolar passion. Thus, for Laurent Joubert, in his Traité du Ris (1579), laughter is a mixture of pleasure and displeasure ; Quintilian links laughter to hatred ; Hobbes depicts laughter as ‘a Suddaine Glory arising from Suddaine Conception of some Eminency in our selves by Compassion with the Infirmities of others, or with our owne formerly’, while for William Prynne, laughter is ‘inappropriately pleasurable and ultimately demonic in origin’.

Recent performance studies have challenged Nicholas Brooke’s basic premise that laughing is a transhistorical constant which implies that early modern audiences had the same reactions as those observed in today’s theatres. Horrid Laughter in Jacobean Tragedy (1979) nonetheless presents an interesting survey of plays which best exemplify a genre where the farcical and the grotesque alternate with tragedy and horror, where sarcasm, bitter irony, sardonic one-liners undermine the dark and the grandiose, as in The Jew of Malta, which Brooke calls ‘a marvelous farce’ (8), Marston’s Antonio plays, where ‘tragic rhetoric and blatant farce’ constantly intertwine (6), Kyd’s Spanish Tragedy and its macabre comic strain, and several plays by Middleton, Webster and Ford, which, in Brooke’s words, ‘end, again and again, with the grandeur and the grotesquerie simultaneously perceived, tears and laughter equally projected.’ (9). Does it therefore make sense to speak of a specific comic vein, a vein fit for the black humour or black comedy intrinsically linked to some early modern tragedies? What, in the plays of Marlowe, Shakespeare, Jonson or Webster and their motley combination of tragedy and comedy, causes audiences to laugh wryly, derisively, cruelly or wholeheartedly of things so dark, horrible or grotesque that they can only be dealt with through the filter, albeit a black one, of laughter?

Black humour seems inherently defined by the spectacular degree of aesthetic and rhetorical self-consciousness with which it operates. By negotiating its stance between the principles of unity and multiplicity, connection and disjunction, it displays all the techniques of the baroque (Berry, 1972). Metatextually, by combining the « camp » and the horrific, Marston contributes to the fashioning of black humour on the Jacobean stage, while Webster points us to the « bitter play » to come, in the play’s Induction (line 25). It would be worthwhile exploring how such variations in self-conscious denomination assume a larger scope, as they are deeply interrelated with audience reception (and production) of black humour. There are those plays that induce laughter in response to a set of humoristic devices that might seem mechanistic and limited ; others address a larger aesthetic and moral framework (strategies of coping with the fear of death or illness) and open up new pathways were it only by (at times unwittingly) devolving the production of black humour to their audience (and critics). Our conference will try to explore the various strategies at play in works of the period that resort to black humour, a lesser-known yet fascinating facet of Maeterlinck’s ‘infernally poisonous black diamonds’. Papers on Shakespeare are as inevitable as they are welcome, but contributions on works by other dramatists are particularly encouraged. Possible topics of investigation include (but are not limited to): Cultural origins and foundations of black humour; black humour: beyond the oxymoronic; black humour, self-conscious aesthetics and denominations; black humour and audience response; black humour, trauma and therapeutic management; the dialectics of black humour.

Papers will preferably be given in English. A selection of papers will be published.