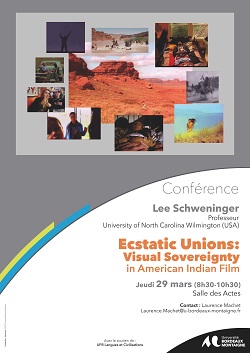 After more than 100 years of Hollywood depictions of dead and dying Indians in countless Westerns, American Indian filmmakers are finally setting the record straight! Until essentially the past twenty years, the only place to see Indians on screen was in Hollywood Westerns, and in those Westerns the Indians' one role was, for the most part, to fall of the horse and die. John Wayne, "the toughest cowboy of them all," alone killed scores of Indians during his acting career. Why then, given this history of Hollywood representation, would American Indian writers and directors themselves spend so much screen time and devote so much of their plots to dying and dead Indians? What does it mean to "talk back" to Hollywood? And how does this new wave of Indigenous filmmakers achieve a form of visual sovereignty? Those are the questions the lecture addresses.