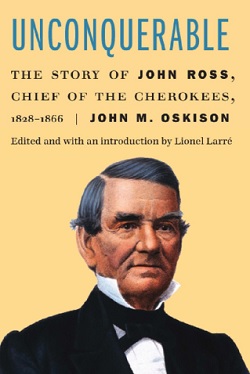 Unconquerable is John Milton Oskison’s biography of John Ross, written in the 1930s but unpublished until now. John Ross was principal chief of the Cherokees from 1828 to his death in 1866. Through the story of John Ross, Oskison also tells the story of the Cherokee Nation through some of its most dramatic events in the nineteenth century: the nation’s difficult struggle against Georgia, its forced removal on the Trail of Tears, its internal factionalism, the Civil War, and the reconstruction of the nation in Indian Territory west of the Mississippi.     Ross remains one of the most celebrated Cherokee heroes: his story is an integral part not only of Cherokee history but also of the history of Indian Territory and of the United States. With a critical introduction by noted Oskison scholar Lionel Larré, Unconquerable sheds light on the critical work of an author who deserves more attention from both the public and scholars of Native American studies.

John M. Oskison (1874–1947) was a prolific Cherokee author, journalist, and activist. He published short stories and essays on Indian life at the turn of the twentieth century, novels about life in the Indian Territory, and biographies of Tecumseh and Sam Houston. Lionel Larré is the president of Bordeaux Montaigne University.

He is the author of several books and the editor of Oskison’s Tales of the Old Indian Territory and Essays on the Indian Condition (Nebraska, 2012).

Published by the University of Nebraska Press